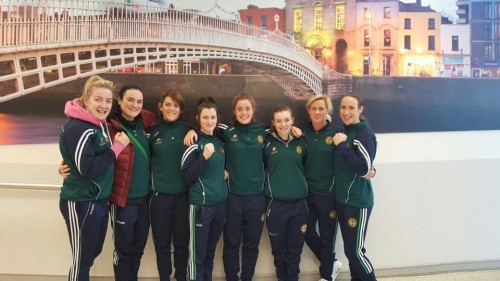 Ireland’s squad for the European Elite Women’s Championships completed their third day of training at the English Institute of Sport in Sheffield today.

Team Ireland are training with Team GB, England and Wales in Sheffield ahead of the opening bell for the 10th European Championships in Sofia, Bulgaria.

The squad return home from England on Sunday and depart for Sofia on November 14th. Boxing begins on November 15th.

Taylor would have been aiming for seven in-a-row in the Bulgarian capital but has decided to switch codes.

The Cork southpaw recorded one notable victory this year after stunning Holland’s World No. 2 Nouchka Fontijn at the European Olympic qualifiers.

A few months after that defeat, Fontijn was beaten by Americas two-time Olympic champion Claressa Shields in the Rio 2016 Olympic final.

“We know that the Europeans are going to be very competitive and we’re under no illusion about that, but the squad are preparing very well and we’re quitely confident.”

Meantime, it has yet to be confirmed if seeding will be in operation in Sofia. Seedings are distributed according to AIBA World rankings which await updating to reflect performances at Rio 2016.