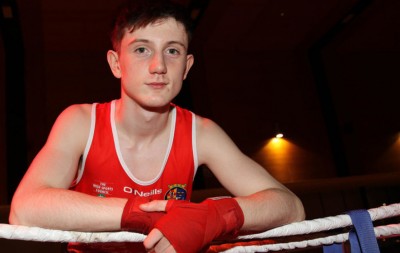 Irish flyweight Conor Quinn will continue working on a dream when he lines out for Ireland at the AIBA World Youth Championships which begin in St Petersburg, Russia next week.

The Belfast teenager is currently with Team Ireland in Moscow training with Russia and Cuba.

On Monday next, it will be “all aboard” for the Boys in Green when they make the 649.7 km (403.7 miles) trip by rail from the Russian capital to St Petersburg.

The nine-strong Irish panel are all current National U/18 champions.

“For about a year-and-a-half I’ve been set on this. I knew if everything went to plan I would get there,” 18-year-old Quinn, a Clonard BC man who represented Ireland at the European Schoolboy and Junior Championships in 2012 and 2013, told today’s Irish News.

“Obviously it’s bigger than any competition I’ve ever boxed in but I’m going with the same attitude as for anything else. I’m going there to win the gold medal.

“If you don’t go in there believing you’re the best in the world, you won’t become the best in the world. The people I have around me, my club coaches Paddy and Peter Graham, from day one they’ve always told I’m going to be a world champion, number one. Now, I have the chance to go and shine and prove them right.”

Two-time Irish Olympian Michael Conlan, also a Clonard BC man and the current World and European gold medallist who has since since switched codes with Top Rank of the USA, is an inspiration to the Irish champion.

“I only live a few streets away from him (Conlan) so, even when he was boxing for [St John] Bosco, I would always have been watching him and learning different things from him, he added.

“He was the number one amateur bantamweight in the world, so you can’t get much better than that for sparring at the club when he’s home. It’s been unbelievable.

“You also learn from the way he carries himself. Mick has a bulletproof mind-set – he’s always been number one and he went and proved it. Taking things from people like Mick, it builds you up towards these competitions.”