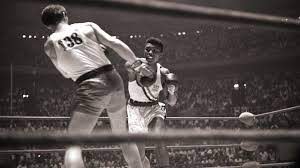 Zbigniew Pietrzykowski won a record fourth European Elite gold medal on the bounce in Moscow in 1963, three years after losing to “The Greatest” in the 1960 Olympic final in Rome.

The Polish southpaw, a three-time Olympic medallist, stopped Lithuania’s Danas Pozniakas in the 81kg decider in the Russian capital.

A five-strong Irish squad competed at Moscow 1963 with Olympic medallist Jim McCourt reaching the quarter-finals at the 15th edition of the tournament.

McCourt (Immaculata BC) won bronze a year later at the Tokyo 1964 Olympics.

Irish captain Brendan Irvine will be aiming to emulate his fellow Belfast Olympian at Tokyo 2021.

Rio 2016 Olympian Irvine qualified for his second consecutive Olympics at the European qualifiers for the 32nd Olympiad on March 16 in London.

Click here for a report on 1963 European Championships and here for results.