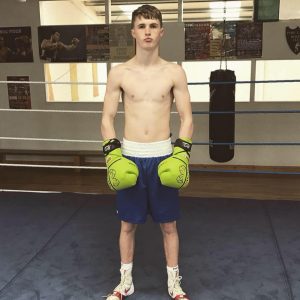 Cian Reddy, pictured, had to settle for silver in Spain on Saturday after losing out by the narrowest of margins at the Boxam tournament.

The Portlaoise BC flyweight was edged out on a 3-2 split decision in the 52kg Youth final by France’s Cerine Allalia in Murcia.

Adam Kelly, who was beaten in the Elite quarter-finals, and Gavin Raffery who secured Youth bronze, also competed in Murcia.

“Lost a split against a boxer on the French national team, 3/2 in the final, said Reddy on social media.

“Thanks to all who supported me back home and my coaches Louie Furlong for all the work over the last five weeks here in Spain, and to Pat Ryan my coach in Portlaoise who always helps and coaches me.

“Well done to Gavin Rafferty, Dean Anthony Gonzalez Furlong who won bronze and Adam Kelly who was unlucky against France in the quarter finals and thanks to my parents Geraldine Reddy and Owen Reddy.”