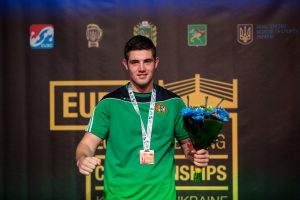 Joe Ward’s British Lionhearts are left with it all to do in the World Series of Boxing (WSB) after losing at home to the Astana Arlans last night.

The Lionhearts lost 3-2 to the Arlans at Ponds Forge in Sheffield in the 1st leg of their semi-final and must win 5-0 or 4-1 in Kazakhstan on Saturday week to go through to the final.

The tie will be decided by a “play-off” in the welter class in the event of a 3-2 win for the British side.

The Arlans, however, will see last night’s result as more than half the battle won.

The Kazakhs – former WSB champions who once had ex Irish Elite champion Eric Donovan in their ranks – are also formidable opposition, particularly at home.

Galal Yafai and Cheavon Clarke won for the Lionherts last evening. Dean Farrell, who once boxed out of the St Anne’s BC in Mayo, was beaten by Ilyas Suleimenov in the bantam class.

The Cuba Domadores, the defending champions, and the French Fighting Roosters meet in the corresponding semi-final.

Joe Ward has won three fights from three outings for the British Lionhearts this season.