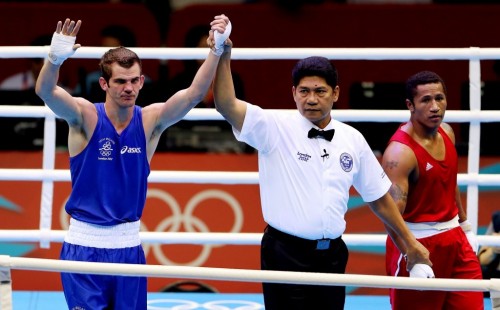 Adam Nolan has his hand raised in victory

London 2012 Olympian Adam “The Guard” Nolan has retired from boxing.

The five-time Elite champion – he also won three underage titles – made the decision, which he described as very difficult, today after months of deliberation.

The Wexford-born southpaw described the London Olympics as the pinnacle of his career and said he’ll never forget the atmosphere and incredible support of Irish fans at the Games.

Nolan and Katie Taylor represented the Bray BC at London 2012, the first male and female boxers from the same club to line out for their country at the same Olympiad.

Speaking via social media, Nolan, who works as a Garda (police officer), thanked all who have contributed to his career.

He said: “It’s hard for me to write this but I’ve decided to call it a day on climbing into the ring, a decision that did not come easy and gave me plenty of restless nights over the last couple of months.

“To my family for all you support and encouragement along the journey, thank you. I owe it all to you.

“I couldn’t have asked from two better mentors in Pete Taylor and Billy Walsh, the memories I shared with them are something special.

“To Padraig Murphy for taking me to the top level of physical fitness, he always had me in great shape going into every championships. A  massive thanks to my bosses in Bray and in particular John Fitzpatrick. 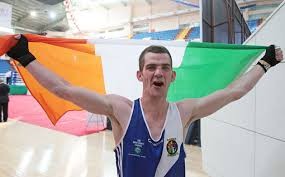 “None of this would have happened without his generosity and understanding. Most importantly, thank you to every loyal supporter who I have shared the good and bad times with, you won’t be forgotten.

“I have no regrets and for me it’s time to hang up the gloves and enjoy a few years of hurling back home with Oulart the Ballagh. Thank you all again.”

Pat Ryan, President of the Irish Athletic Boxing Association (IABA), said that Nolan distinguished himself domestically and internationally as an Irish athlete.

“I would like to congratulate Adam Nolan on his exemplary service to Irish boxing.He has distinguished himself on the podium and in life, he said.

“I have known Adam since he started boxing as a juvenile. On behalf of the Irish Athletic Boxing Association, I wish him every success in his retirement from boxing. He has represented his clubs, family, county and country with distinction in international and national competition and the Irish Athletic Boxing Association thanks him for his outstanding contribution to our sport.”