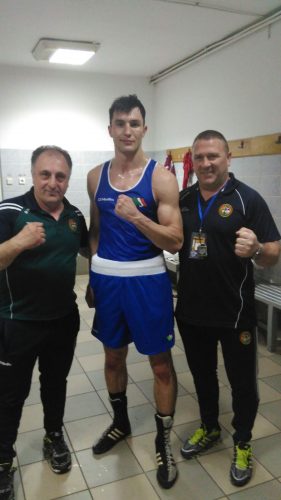 Kiril Afansev claimed a fourth straight title for Ireland at the Nicolae Linca Memorial in Iasi, Romania today to cap a stunning tournament for Irish boxing.

Irish head coach Zaur Antia, who is working Ireland’s corner with Jimmy Payne in Iasi, hailed the performances of the entire Irish squad, while team manager Jennifer O’Sullivan said they were absolutely thrilled to be taking home four gold medals.

Carly McNaul gave a fine account of herself in a 3-2 split decision to Ukraine’s Hanna Ohata in the preliminaries.

Ireland won 10 of 11 bouts in Romania at a tournament to perpetuate the memory of Nicolae Linca who beat Irish boxing legend Fred Tiedt in the 1956 Olympic welter final in Melbourne.

Team Ireland are due to arrive home tomorrow via Dublin Airport at 2.30pm (Terminal 2).