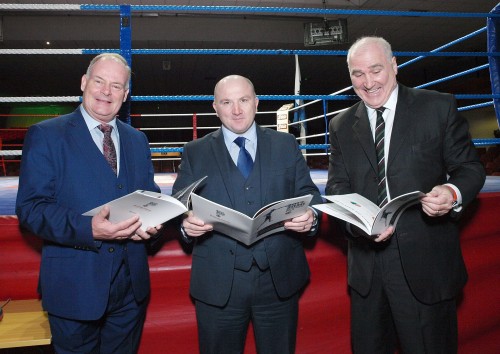 At the IABA 2017-2020 Strategic Launch in the National Stadium were Pat Ryan President IABA, Fergal Carruth CEO IABA and Joe Christle Chairman of the Board of Directors IABA. Photo John Mooney Photos

The occasion follows yesterday’s AIBA Executive Committee meeting, at which the collective strength of AIBA was showcased, according to a press release.

A number of key rules changes were rubber stamped for 2017 and will be adopted at the various  Continental Championships and World Men’s Elite Championships in Germany next year.

AIBA described Monday’s Executive meeting as the first step on the road to Tokyo 2020.

At the AIBA Extraordinary Executive Committee Meeting in the Swiss city of Montreux on Monday, the collective strength of AIBA and the unswerving support of President Dr Ching-Kuo Wu were underlined by all Executive Committee (EC) members on the eve of its 70th anniversary. Technical and AOB rules, financial updates and the calendar for the new Olympic Cycle to Tokyo 2020 were all unanimously agreed upon during a session that underlined the integrity of the institution, the EC and all who represent AIBA’s forward-looking direction..

“The AIBA Executive Committee has gathered today to show that, even in the face of malicious, unfounded attacks that have dared to call the honour of us all into question, we will stand unified. I speak for AIBA, the Executive Committee and all our National Federations when I say that we will not tolerate any misrepresentation of our collective spirit, either internally or externally. The discussions and outcomes of today’s meeting show that AIBA can move forward into the Tokyo 2020 Olympic Cycle stronger than ever,” said AIBA President Dr Ching-Kuo Wu.

Key changes to R&J system trialled and unanimously approved
Changes to the AOB and Technical rules that will ensure transparency in the appointment of Referees and Judges were also unanimously agreed upon. The use of all five judges to determine the winner of each contest and the deployment of the Swiss Timing electronic system to randomly select officials before the bouts, along with the removal of the Draw Commission, will all ensure the clean efficacy of key tournament procedures.

To give the Judges the optimal conditions to score a match, they will now also be placed on all four sides of the ring, rather than three, and the R&J Evaluator role will become a recognised ITO position to continue the optimisation of their decision-making. Each of these elements was successfully trialled at November’s Youth World Championships in Saint Petersburg and received the full backing of the Executive Committee.

Financial update shared with Executive Committee members
The financial updates for the past twelve months were shared with the Executive Committee and were unanimously welcomed along with the provisional projections for the coming Olympic Cycle to 2020. The membership status of two National Federations was then also approved, with Peru’s suspension lifted following new elections in October in accordance with AIBA rules and the successful reapplication of St Maarten, bringing the total number of National Federation Members to 201.

AIBA EC Vice President Mr Franco Falcinelli summed up the air of togetherness, saying; “I want to express my deep satisfaction with today’s spirit and sharing of information and our support for President Wu. During the last ten years we have believed in the President and his integrity, and anything that may damage the institution of AIBA we must face together. We will continue to help our President and to work as one for the good of boxing.”

“Everybody wants the privilege of leadership and to have a voice, but with that comes the burden of responsibility which we all share on the EC as the leaders of AIBA, and we must all respect that and act honourably. Our mission statement is to govern boxing, and it is our job to ensure that this role is carried out with integrity and honour.”

“We, the Executive Committee, are not individuals, we are AIBA, and we have a responsibility to put AIBA above anything else. That is why we were elected, and that is where our responsibility lies. The strength of any organisation resides in the integrity of its members, and implicit in the AIBA code is the requirement of individuals who are beyond reproach, who will act in honourable and trustworthy fashion, and will not tolerate others who bring dishonour to the organisation,” Mr Virgets concluded.

2017 and the new Olympic Cycle
The meeting was the first step on the road to Tokyo 2020, and the decisions approved will be adopted by the Continental Championships being held between June-July next year and the 2017 Men’s World Championships in Hamburg. The coming 12 months will also see the continuation of the HeadsUp initiative and a broad education programme of training and workshops for R&Js and coaches, as well as the 2017 Year of Africa.