The second session of semi-finals were completed at the 10th edition of the tournament today.

Harrington, who boxes out of the St Mary’s BC in Dublin, meets Thai southpaw Sudaporn Seesondee for 60kg gold.

Except for Columbia, Saturday’s deciders are an Asia versus Europe showdown.Ukraine (2), Ireland, Bulgaria, Germany, Netherlands and Turkey represent Europe.

Asia will be represented by 12 athletes, with China,who’ve advanced five into the gold medal matches, leading the way.

Harrington, a silver medallist at light-welter at the 2016 World in Kazakhstan, and Seesondee have claimed four wins each en route to bout No. 262 in the Indian capital.

Boxing begins at 10,30am on Saturday morning (Irish time). 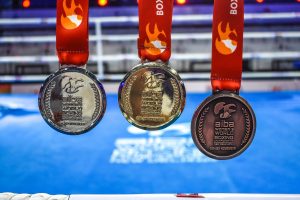 Irish male and female boxing has won 41 medals – nine of which are gold, so far – in World and European Elite, U/22,Youth Olympic, Youth,Junior and Schoolboy/girl competition since April in a vintage year for the sport.

The complexion of medal No. 41 will be confirmed tomorrow.

The six-strong Irish squad are due to arrive home from India at 4pm on Sunday via Dublin Airport.

Please see below for details of homecoming.