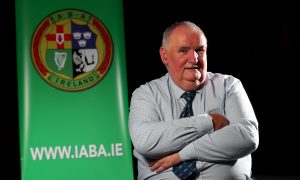 Mr. Konakbayev acknowledged that O’Rourke has been involved in boxing most off his life, and as coach with the St Michael’s Athy BC coached Olympians, European medallists and Irish Elite champions John Joe Joyce, David Oliver Joyce, Eric Donovan and Roy Sheahan and numerous national champions in all age groups.