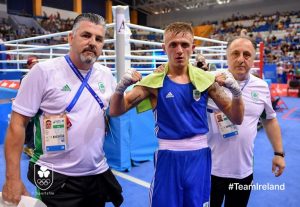 Team Ireland finish up their final international training camp before next month’s European qualifiers for Tokyo 2020 in London in Assisi, Italy on Friday.

The squad is training with the host nation, Finland, France, India, Moldova, Switzerland, New Zealand, Romania and Russia in Assisi.

Bernard Dunne, IABA High-Performance Director, confirmed that Cavan BC flyweight Ceire Smith picked up a hand injury in sparring and has returned home because of the injury.

Belfast flyweight Carly McNaul has joined the squad in Assisi.

Dunne said that with the exception of Smith’s unfortunate injury that the training camp was going really well and the team were getting a lot of work done against world-class opposition.

The squad will train in Dublin in the lead up to the London qualifiers which begin on March 13.