A six-strong Irish squad fly out to the Bahamas tomorrow ahead of the opening bell for the 2017 Commonwealth Youth Games in Nassau on July 18th.

Boxing will be held at the Sir Kendal Isaacs Gymnasium which will also host Judo at the Games.

The squad have completed a top training camp with France, Germany, Spain, Scotland and Irish squads (pictured below) at the University of Jordonstown ahead of their trip to the Bahamas. 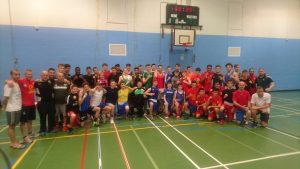 “It’s great – you can only learn from the best,” says the 17-year-old Derry lightweight Bradley.

“That’s what you need and it’s a great opportunity for me. To have sparring partners like that and training facilities like we have here in Jordanstown, it’s top notch.”