The omens were looking positive for Ken Egan in his quest to join an illustrious cast of greats, including Rome 1960 Olympic light-heavyweight champion Muhammad Ali, versus China’s Zhang Xiaoping on this day, August 24, ten years ago.

Sixteen years prior to the Egan versus Xiaoping Beijing 2008 light heavy final, Michael Carruth topped the welterweight podium at Barcelona 1992. Carruth was Irish captain at the 25th Olympiad, a southpaw and from Dublin.

Egan was Ireland skipper at the 29th Olympiad, a southpaw and from Dublin. Irish coaches Billy Walsh, now USA chief seconds, and current Irish head Zaur Antia would have taken confidence from Darren O’Neill 23-10 rout of Xiaoping at the Geebee Multi-nations in Helsinki in 2006.

Egan was favourite for gold, but his Inner Mongolia-born opponent won 11-7 under the now defunct computer scoring system amidst an hysterical atmosphere at the Workers Gymnasium and legitimate arguements that the Dubliner was denied scores.

In order for a point to register, three judges had to press either the red or the blue buttons corresponding with the red and blue corners within a one-second time frame of each other.

Egan was in the red corner and clearly didn’t receive credit for clean punches in the second and third rounds: “The guys (judges) in red must have frozen fingers,” observed an American TV commentator.

“I could hear the (home) crowd going wild when I landed a shot, Egan recalled this week. “I was thinking “that doesn’t sound right”.

“Judges make mistakes in those vital seconds when you have to press the red or a blue button but I still walked away with a medal. They’re hard to come by.” 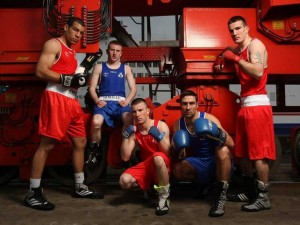 The Irish boxing team in Beijing, which also included the late Darren Sutherland and Paddy Barnes, who won double bronze, and John Joe Nevin and John Joe Joyce, finished preparations at the naval base of the Russian nuclear fleet with Gary Keegan, the then IABA High-Performance Director, and staff.

“We had a training camp in Vladivostok with Russia, the best team in the world at the time. Everything just came together there, physically, emotionally, mentally. I only conceded seven points to the final, I just couldn’t be hit I was boxing so well,” added Egan.

Boxing, with Jim Walsh as team manager, won Ireland’s only medals in Beijing. Remarkably, all the Irish boxers were only beaten by eventual champions.

“That was a fantastic achievement in itself from the team considering the quality they were up against,” said Egan who retired in 2013 with one Olympic medal, three EU titles, one EU silver and bronze, two European Elite bronze medals, ten – successive – Irish Elite belts and a shed load of Multi-nations levels.