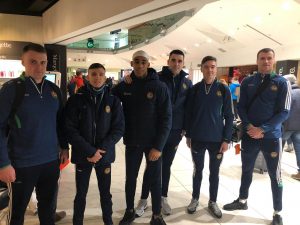 Dean Gardner was beaten in the last 32 of the Bosckai Memorial in Debrecen, Hungary tonight.

Gardner worked well behind his jab in the opening round and Mraovic almost took a count off a combination with some serious leather flying from both sides.

But the Irishman took a count off a right in the second and went down under an overhand right moments later and the bout was stopped.

The Antrim flyweight was beaten on a split decision by Botswana’s Mohammed Rajab in his first international back from injury since last April’s Chemistry Cup.

Irvine, who beat Rajab in the last eight of the 2018 Commonwealth Games, won the second round but the industrious African orthodox worked hard in all three frames.

Irvine was disappointed with the loss but glad to get some rounds under his belt against the Botswana team captain.

He said: “(It) was good to get back in the mix of things. Hopefully, that’s the rust off. I know myself I’m a lot capable of more, just inactivity played a part today.”

Both men will be in the ring at approximately 6pm (Irish time) on Tuesday.

See below attachment for Day 2 schedule.