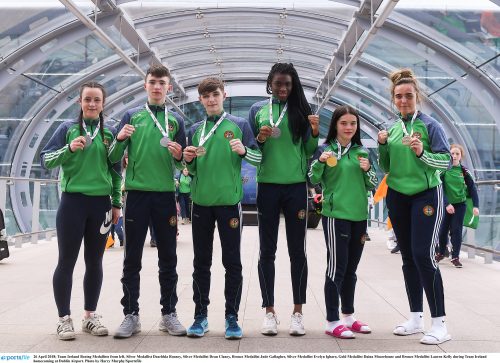 Wicklow light-fly Dainne Moorehouse and Leitrim feather Dearbhla Rooney, pictured above with Irish team mates, have been nominated for the RTE Young Sportsperson of the Year Award.

Moorehouse, who boxes out of the Enniskerry BC, claimed European Youth gold in Italy in April and Rooney (Sean McDermot BC) won silver.

The podium finish maintained Irish boxing’s proud tradition of having medalled at every Youth Olympics – Ryan Burnett (2010, gold) and Ciara Ginty and Michael Gallagher (2014, silver and bronze) and Rooney (2018, bronze).

Thirteen nominees are in the hat for  RTÉ Sport Young Sportsperson of the Year accolade.

The winner of award, for athletes under the age of 20 before January 1, 2019, will be chosen by senior members of RTÉ Sport and announced live during the awards ceremony this Saturday from 9.20pm on RTÉ One.

World Elite champion Kellie Harrington has been nominated for the Sportsperson of the Year Award.

Harrington, Moorehouse and Rooney and compatriots helped Irish boxing claim 41 medals in top international competition in 2018 in a vintage year for the sport.