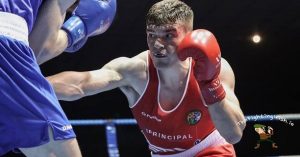 Ireland experienced contrasting fortunes at the European qualifiers for Tokyo 2020 in London.

Bates had his hand raised in victory after  Spain’s Leon Dominguez picked up a nasty-looking cut near his eye late in the first round.

And Bates, who was boxing well within himself in the opening frame, won on points (10-9) when it went back to the scorecards.

“I’m very satisfied with the performance, it all went well from the start. I’m planning to go all the way,” said the Irish champion after his win. 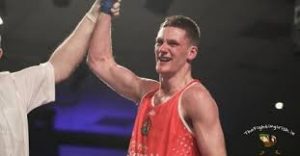 Rebel County welter Desmond bowed out in the second fight of the evening session.

The Irish Elite champion was beaten on a unanimous decision by Italy’s Angela Carina, the No.3 seed, following a close all southpaw three-rounder.

Desmond slightly staggered her opponent with a sweeping left in the first round, but the Rome native, the 2019 World Elite light-welter finalist, worked hard throughout an open and clean bout.

Earlier today, Brennan got Ireland off to a winning start after stopping Radenko Tomic of Bosnia & Herzegovina.

Brennan took the first round and piled on the pressure in the second with the ref waving it off after Tomic took a count in the 2nd round.

The Dublin Docklands BC man, who needs a top 6 finish to qualify for Tokyo, will be back in action on St Patrick’s Day against Switzerland’s Uke Smajli.

“I stuck to instructions and it just went a little bit better than we thought. The plan is to go all the way, you don’t come here without planning on that,” said the Irish champion.

Afanasev made it three wins out of four for Ireland after a tough battle with Georgia’s Begadze Nikoloz in the second last bout of the day; Afanasev earning a split decision win to set up a busy St Patrick’s Day for Ireland.