Amy Broadhurst will be in action in the early shift at the World Women’s Elites in Ulan-Ude, Siberia tomorrow.

The Dundalk lightweight meets Poland’s Aneta Rygielska at approximately 6.45 am (Irish time) on Wednesday morning for a place in the quarter-finals.

The Quebec welterweight is the No. 5 seed in the 69kg class in Siberia. 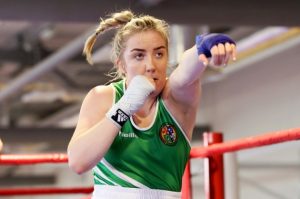 Ceire Smith and Michaela Walsh bowed out of the tournament at the last 16 stages to North Korea’s current World Elite flyweight champion Mi Choi Pang and featherweight Liudmila Vorontsova, who is one of three Ulan-Ude boxers on the Russian squad, on split decisions today.

“Close enough fights, I suppose we just came out on the wrong side of them. Two split decisions,” said Bernard Dunne, the IABA High-Performance Director, from Russia.

“Ceire was in with the world number one in a very close bout. Michaela is in the with the home boxer, again being a split, another very close bout. It’s very hard to pick between them. All we can do is ask our guys to perform and give themselves an opportunity of winning and in fairness that’s what they did.

“Two guys (Amy and Christina) are in great shape, great form. They cannot wait for tomorrow.”