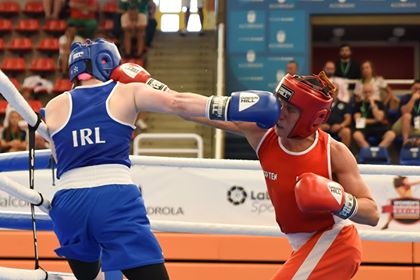 Amy Broadhurst had to settle for bronze at the European Elites following a tight encounter with Mira Potkonen in the semi-finals of the European Women’s Elites in Madrid today.

Broadhurst arguably did enough to win the first round and could have shaded the second while the Rio 2016 bronze medallist claimed the third frame of a close and hard-punching bout on the unofficial scores.

The Dundalk southpaw had particularly good first and second rounds and repeatedly tagged her industrious opponent with her backhand while Potkonen’s best work was when she closed down
space.

Speaking after the decision, Irish team manager JP Kinsella said they were disappointed with the result but hailed Broadhurst’s performances this week in her debut at this level.

Meanwhile, Aoife O’Rourke, the last Irish boxer remaining in the tournament, will be in the ring at approximately 7pm (Irish time) tonight versus Russian middleweight and Olympic Youth champion Anastasia Shamonova.