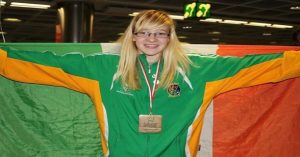 Amy Broadhurst, pictured, guaranteed herself at least bronze at the European U/22 Championships after earning a unanimous decision over Turkey’s Esra Yildiz in Romania this afternoon.

Broadhurst, a former European Junior and Youth champion, will be aiming to edge a step further toward a unique Continental hat-trick against France’s Belinda Limuka in Thursday’s lightweight semi-final in Targu Jui.

The Dealgan BC southpaw consistently found the target against the European Elite bronze medallist with solid backhands today, particularly in rounds one and two. A right jab, delivered straight down the middle, straightened her AIBA World Elite ranked opponent in the second frame.

Yildiz’s best work developed when she closed down the distance and backed Broadhurst up, but the Dundalk lefty gave as good as she got when they action switched to the ropes.

Shannon Sweeney bowed versus Mari Emi-Todorova. Big performance in all three rounds from the Irish U/22 light-fly champion who asked plenty of questions of the experienced Bulgarian in an open contest.

Ireland is now guaranteed two bronze medals in Targu Jui, as Aoife O’Rourke is also through to the last-four. The medals are our first podium finishes at this level since Jason Quigley and Hughie Myers won gold and silver at the 2012 European U/22 Championships in Russia.

“Amy boxed very well,” said IABA President Dominic O’Rourke. “It was close, as you would expect. The Turkish girl is experienced and has also won won European medals but it was a tremendous performance from Amy.

Gabriel Dossen is in quarter-final action tomorrow. Aoife O’Rourke, who is also assured of at least bronze in Romania, received a bye into Thursday’s semi-finals versus Carlotta Paoletti of Italy.