Regan Buckley and Sean Mari are refusing to be disheartened by the abolition of light-flyweight as an Olympic limit.

Wicklow light fly Buckley, who has returned to Elite boxing from the pro ranks, meets Dublin-native Mari for the vacant 49kg belt on the Liffey Crane Elite finals night at the National Stadium on Saturday.

The International Boxing Association (AIBA) have dumped light fly and light for men for Tokyo 2020 and reduced men’s limits from ten to eight for the 32nd Olympiad.

Welter and feather have been added to fly, light and middle as the new Olympic weights for women.

Belfast’s Paddy Barnes claimed two of Ireland’s 16 Olympic boxing medals at light-fly at Beijing 2008 and London 2012 where the limit was expanded from 48kg to 49kg.

”The 49kg being scrapped from the Olympics initially was a big shock for me but I wouldn’t let it dishearten me, said Buckley of the St Teresas BC.

“I have set target goals for myself to reach, the Elites being a big goal for me since I was a kid. Please, God, I come away with the title on the weekend, I will then set bigger goals for myself going forward.”

The Bray orthodox would have welcomed an outing ahead of his showdown with Mari who impressed en route to a unanimous decision over Rory Baird last weekend.

“I received a bye into the final as there was only three of us in the weight. I would have loved a semi-final to get to fight in the competition rather than just the one but I won the U/22 finals just a couple of weeks ago so I’m very sharp from that.

“I feel physically very strong at the 49kg and I’m in the best shape of my life.”

Mari, who boxes out of the Monkstown BC, agrees with Buckley and admitted he was initially very frustrated when the AIBA cut the lightest of the men’s weights adrift.

However, the 18-year-old has time on his side and is looking toward the Paris 2024 Games, a century after Ireland entered the Olympics independently for the first time in Paris in 1924.

“My view at the moment about 49kg no longer being an Olympic weight is it is very frustrating and at first I was very annoyed when the news first broke, said Mari.

“But as I sat back and had a think about it, I am still very young and have lots and lots of time and experience to gain before the following Olympics in Paris in 2024.

“That, ultimately, is my goal in amateur boxing. Until then, I will keep working hard, pushing myself, gaining experience and hopefully winning Championships.”

The Dubliner believes it’s an honour to step into the ring on Elite finals night.

“I am very much looking forward to Saturday’s final, preparations are going really well.A lot of really hard sessions have been put in over the last few months for these Elites and it’s an honour to get to the final first time of asking, he added.

“I’m excited as I have nothing to lose and I’m just concentrating on my performance more than anything else. Once I perform in the ring I will be happy.Taking home that trophy would mean so much to me so I am excited for the big night.” 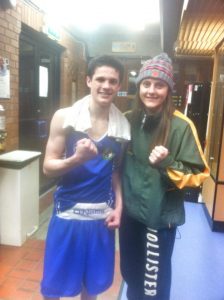 Meanwhile, two-time Commonwealth finalist Michaela Walsh will be aiming for her eight belt in three different weights – 51kg, 54kg and 57kg – in the feather (57kg) dust up against former champion Dervla Duffy in a repeat of the 2018 decider which Walsh won.

Saturday’s finals will be broadcast live by TG4.