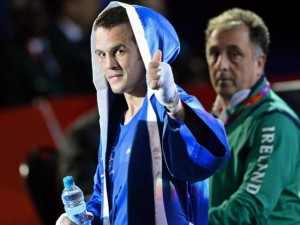 The South American team, who were 3-1 up going into the last bout, won 3-2 on the night.

Neither O’Neill, Barnes or Donnelly were in action last evening.

Barnes and Donnelly have already qualified forn Rio 2016, along with Michael Conlan and Joe Ward.

David Oliver Joyce will have the option of competing in the WSB v APB qualifiers. However, it’s an option he’ll gladly forfeit because if he books a ticket for Rio 2016 in April’s AIBA Open Boxing (AOB) qualifier in Samsun, Turkey, May’s WSB v APB dust up will be of academic interest only.

Joyce and Joe Ward are contracted to APB. APB boxers can compete in AOB if the latter is part of an Olympic qualification process.