Caroline Rodrigues has been employed as Women in Sport Officer for the IABA in Dublin.

Caroline has been involved in Sports, Events and Venue Management for many years having organised sporting events such as Olympic and Paralympic Games as a Venue Manager in the venue that held Judo, Wrestling and Boccia, the American Cup (Soccer tournament) as a Marketing Coordinator, the Wheelchair Fencing World Cup as the Event Coordinator and many others.

Caroline has vast experience working in the sports administration area in public and private Brazilian sporting bodies such as Brazilian Ministry of Sports as an Anti-doping Operations Coordinator and Brazilian Paralympic Committee leading the anti-doping, classification, health and the disciplinary court areas in that body.

She is a former professional volleyball player. She played for about 18 years in Brazilian and abroad teams and she has won numerous Brazilian championships and South American and World medals representing Brazil on the world stage in the youth and university tournaments.

She will be committed to increase women’s sustained involvement in boxing as coaches, volunteers, club members, officials, leaders and participants from grassroots to elite performance. 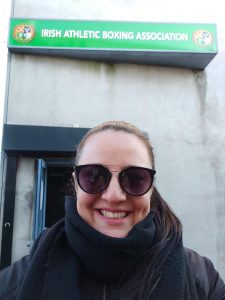