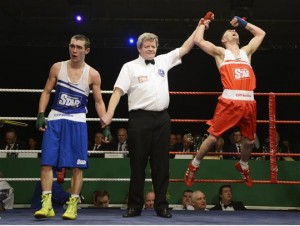 Limerick’s Myles Casey has admitted that trying to keep his Rio 2016 dream alive at flyweight was impossible.

The St Francis BC ace has moved up to bantamweight from fly for Friday’s Elite final against defending champion Kurt Walker.

Casey claimed his first Elite belt at flyweight last January and represented Ireland at the European Games in Baku, Azerbaijan.

“I tried to keep the dream alive for Rio at 52kg but the weight was impossible.In my own mind I kept thinking I could make it, but it was time to move up, I had to face the facts, said the Irish international, who added he feels strong at 56kg.

“I feel more explosive, I can feel the shots going the way I want them to.”

“I sparred Kurt in the High Performance but I was making 52kg when I was sparring him. I’m fully convinced it’s gonna be a different fight.

“He might not think it will, but I know in my mind it will.”