All 2016 Celtic Box Cup champions had their hands raised in triumph in Waterford today.

Over 60 finals were completed in most age classes this morning and afternoon in Dungarvan.

“She’s (Nicolson) top class. It was more of a chess match, same as last Sunday (Harrington beat the Queensland southpaw in a pre-tournament bout in Dungarvan seven days ago),” said Harrington who is coached by Jimmy Halpin at the Glasnevin BC.

“These are exactly the type of tournaments I need ahead of the European Elites in November. I’m thrilled with the win,” added the RTE boxing pundit who is ranked joint No. 4 in the world at 64kg. 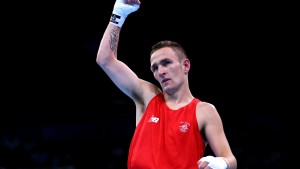 Former Irish Elite champion Myles Casey of the St Francis BC,pictured, beat Tiago Miguel Lopes of the João Faleiro BC on a unanimous decision to secure bantam gold this afternoon.

The Celtic Box Cup was conceived by and launched by the President of the Munster Council, Gerry O’Mahony, and his fellow officers at the Dungarvan BC in 2013 and has since evolved into a prestigious international event with teams from all over the world competing.

Pat Ryan, President of the Irish Athletic Boxing Association, officially opened the 2016 edition of the tournament on Friday.