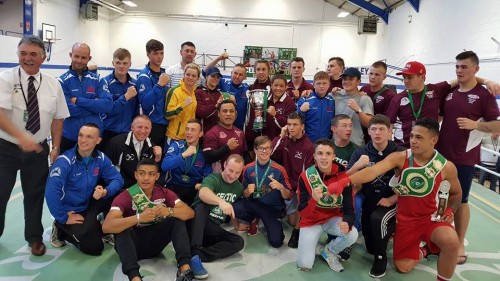 The Celtic Box Cup Best Team Trophy was heading Down Under yesterday after Boxing Queensland of Australia claimed the 1st prize after securing an impressive haul of five gold and three silver in Dungarvan, Waterford.

Harrington of the Glasnevin BC in Dublin edged the Boxing Queensland southpaw on a split decision in the light-welter final in a bout the Dubliner compared to a game of chess.

Nicolson said: “Great respect to my all class opponent Kelly Harrington. Awesome opportunity to have the current silver medallist and bronze medallist from the world championships getting to fight it out a couple of months after sharing the podium together.

“I didn’t get the decision but another great learning curve towards where I’m heading! Thanks everyone for the messages and support”.

Boxing Queensland – the club trained in Dungarvan for over a week before the 2016 Celtic Box Cup – coach Shara Romer hailed the hospitality of the Dungarvan BC.

He said: “Massive thank you to Killian Walsh and Gerry O’Mahony for making us so welcomed into their gym along with their awesome van and countless meals! Very much appreciated“!!