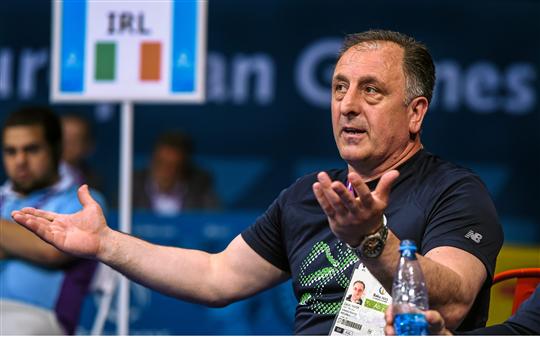 Challenging the best is the key to growth and development, according to Irish head coach Zaur Antia with the Irish Elite team at the Chemistry Cup in Halle, Germany.

Five bronze medals are guaranteed at the 45th edition of the tournament – Ireland’s most expansive haul in terms of quantity at a multi-nations acknowledged as one of the most prestigious in the world – courtesy of Irish captain and three-time European Elite Joe Ward, Conor Quinn, George Bates, Kieran Molloy and Kiril Afanasev.

The five are back between the ropes today. Three of the semi-finals are against powerhouses Cuba.

The Cubans sent a formidable squad of Olympic, World and Pan Americans champions and medallists to Halle and are assured of nine bronze with athletes slated to fight in every semi-final except the bantam decider – following Hamsat Shadalov’s (Germany) shock but deserved win over two-time, two-weight, Olympic champion Robeisy Eloy-Ramirez who beat Michael Conlan in the London 2012 flyweight semi-final.

Ireland has the highest representation in the last-four of the 16-nation event after Cuba and the host country.

“The performances are excellent, I wanted to have more fights here for development, said Antia who has helped steer Irish boxing to a raft of Olympic, World and European medals this century.

“The medals are there, but the important thing is growth and devolopment. What I’m looking for is to see how they challenge themselves, to see how they use every opportunity, inch by inch. That’s progress.

“We will see what happens. Cuba, you know, they’re Olympic, World champions, medallists, very strong. We challenge because that’s what makes you grow.”

Ward, meantime, meets Olympic champion Julio La Cruz in a repeat of the last two World Elite finals which the Cuban won in Hamburg and Doha.

Speaking after Thursday’s win, Ward, a two-time Chemistry Cup gold medallist, said he believes that he and La Cruz are the two best light-heavyweights in the world.

The Westmeath southpaw is on familiar terms with beating top athletes in Halle as he stunned Egor Mekhontsev in the 81kg final on St Patrick’s Day six years ago just a few months before the Russian won gold at London 2012.

Antia added: “This is another challenge for him (Joe Ward). He wants to try and beat this boy to see what else he can do in the future.”

*Cork’s Michael Roche (Sunnyside BC) became the only Irish boxer to qualify for Sydney 2000  after reaching the Chemistry Cup final 18 years ago.*