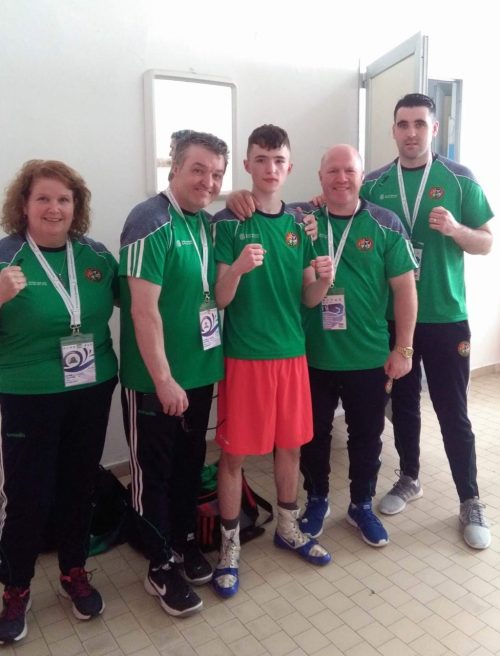 But there was last-eight disappointment for Caitlin Fryers and Edward Barrett, while Aoibhe Carrabine, Mary Geraghty and Aoibhe Ginty went out at the last 16 stage.

Clancy beat Italy’s Patrick Cappi on a 4-1 split to advance to the 52kg semi-finals.

The Sligo flyweight took round one on four cards and swayed three judges with him to lead 20-18 on three cards going into the final frame.

Barrett, in against England’s Karol Itauma in an excellent all southpaw battle, stung the Londoner with a short right in the second, but  Itauma, a 2017 Celtic Box Cup champion, forced the Irish light-heavy into two counts in the same frame to ultimately seal victory. A close first round finished 3-2 to the eventual winner.

Geraghty was beaten by Aycan Guldagi, the Turkish bantam taking the first round of a lively encounter. Geraghty upped the pace in the latter frames and certaintly detonated enough leather, but the hard-working Turk progressed.

Fryers hit the ground running in her flyweight clash with Liubov Sharapova, the World Youth medalist lashing home two combinations inside the opening 30 seconds. The Belfast fly also connected with a huge right at the start of a second round which finished even at 19-19 on four cards and 20-18 to Sharpova  who got the nod on four cards from a see-saw final frame.

Carrabine led 4-1 at the end of the first in an exciting light-heavy clash with Sagit Emanur  but the gutsy Turk battled back to take the final two stanzas. Ginty, the last Irish boxer in action tonight, was beaten by Germany’s Stephanie von Berge.

Six Irish fight in the quarter-finals tomorrow aiming to join Clancy on the medals podium.