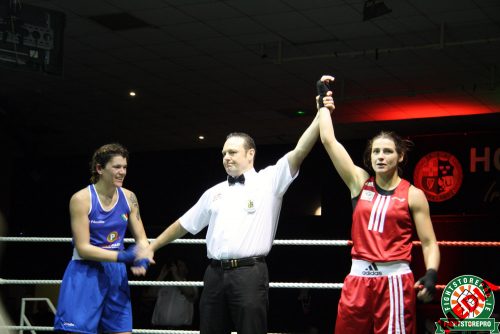 Clonmel BC lightweight Shauna O’Keeffe was being given roughly the same odds against Katie Taylor in 2015 as David against the previously undefeated Goliath in the Valley of Elah.

But the Tipperary southpaw gave a fine account of herself against in the Irish Elite 60kg final against the greatest pound-for-pound female fighter of all time at the National Stadium.

The November 27 decider marked the first occasion that Taylor, who had claimed her four previous Irish belts on walkovers, fought for an Irish title.

The Bray woman, then the reigning Olympic, World, European, European Games and European Union champion, earned on a unanimous decision over the Munster lefty.

But O’Keeffe, who had Martin Hennessey in her corner and Clonmel BC staff, earned plenty of plaudits for her gutsy display in contest No. 5 at IABA headquarters.

The National Elites were run twice in 2015 to facilitate Ireland’s boxers going into the qualifiers for Rio 2016.

The men’s finals were decided in December of that year.

The Irish lightweight crown was the last title Taylor won in the amateur ranks and she switched codes after Rio 2016.

“I feel unbelievable there are no words to describe how I’m feeling. I wanted to go in and perform and put on a good show and that’s exactly what  I did. Nobody in the whole of Ireland can take the experience that I just got off her, said O’Keeffe after the clash.

“The whole of Clonmel has been following me every fight and they all got on a bus to watch me tonight and they helped me in the ring.”