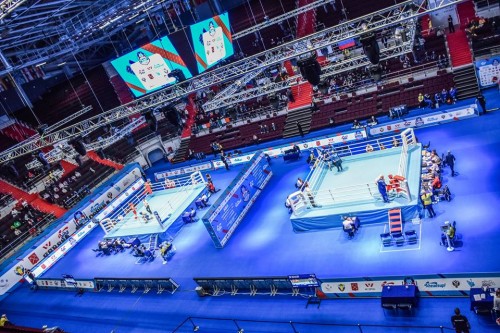 Ireland experienced contrasting fortunes at the World Youth Championships in St Petersburg, Russia today, with Jordan Moore advancing but Eamer Coughlan and Conor Quinn bowing out at the preliminary stage of the 63-nation tournament.Moore made it four wins on the trot for Ireland at the Sibur Arena this morning.

The Dublin light-flyweight beat Germany’s Salah Imberahim over three-three minute rounds to advance to the last-16.

Switching from orthodox to southpaw, Moore took the first two rounds and dominating the third, a sweeping combination rocking Imberahim backward mid-way through the final frame en route to victory.

Coughlan was beaten on a 4-1 split decision after a 56kg slug-fest with Kazakhstan’s Toltayayev Samatav.

Both young men went at each other hammer and thong for the entire three rounds,both finding the target with just about every head and body shot in the book in a top class contest.

Coughlan’s left hook, which he used to great effect in the second, was by far his most effective shot. The Kazakh was dropping home rights throughout, while the close exchanges were ferocious, particularly when the Cork fighter pinned his opponent in the corner.

Coughlan continued to walk down his man going down the final stretch, again detonating solid shots, but Samatav got the verdict.

Quinn was the last Irish boxer in action today versus Elio Crespo-Santos, the Cuban earning a unanimous decision after a cagey three-rounder.

Crespo-Santos was adjudged to have edged the first two stanzas of a tight fly contest, both men counter punching on the counter, so to speak, and feigning.

Quinn started the third very strong, taking the fight to his opponent to win the final frame, but the Cuban champion had enough in the bank from the opening two rounds.

AIBA are using all five judges to score bouts in St Petersburg, scoring which is expected to be introduced – or re-introduced seeing as it was used before but dropped for the 1992 Olympics – in all grades in the New Year.

St Petersburg is three hours ahead of Ireland.