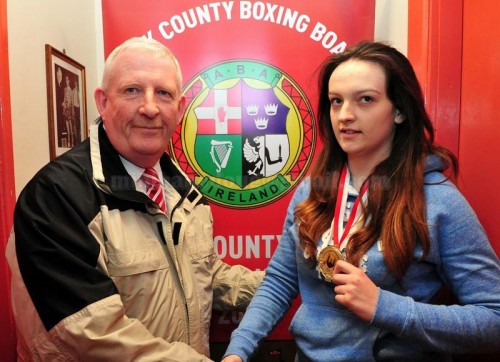 Cork Board President Michael O’Brien presenting Shelley Thomas (Loughmahon BC) with a medal.

The Cork County Boxing Board (CCBB) will host a Boxing Breakfast this Saturday morning to laud women’s contribution to the sport on Leeside.

The President of the Leinster Board, Bernie Harold, will address the Breakfast which begins at 10am at Clancy’s restaurant.

Bernie Harold became the first woman in the 105-year history of the Irish Athletic Boxing Association (IABA) to be elected President of a Provincial Council in 2015.

Pat Ryan, President of the IABA, said: “I would like to thank the ladies of Cork for their invaluable contribution to our sport on behalf of the Irish Athletic Boxing Association.

“Their contribution has been enormous and the Irish Athletic Boxing Association are proud to be associated with this event.”

Echoing the views of the IABA President, Michael O’Brien, President of the CCBB, said: “The women of Cork boxing have worked as volunteers for many years and their contribution to the promotion of boxing on Leeside has and continues to be absolutely outstanding.”

The CCBB, in conjunction with the Cork boxing fraternity, have been hosting the hugely popular Boxing Breakfast events for over five years to honour those involved in the sport both inside and outside the ropes.