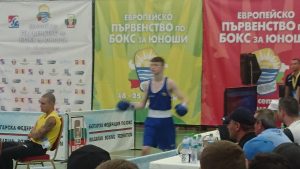 Just 26 days remain to the opening bell for the Youth Olympics in Buenos Aires, Argentina.

Lauren Kelly (St Brigid’s, Edenderry), Dervla Rooney (Sean McDermott BC) and Dean Clancy (Ballinacarrow BC) will represent Ireland at the Games in the middle, feather and fly classes.

Some of the world’s top boxers, including Ireland’s current WBA pro champion Ryan Burnett and three-time European Elite champion and three-time World Elite medallist Joe Ward, have represented their country at this level this decade.

Burnett claimed light-flyweight gold in Singapore in 2010 after beating Azerbaijan’s Salman Alizide in the 48kg final just a few months after he was edged out in the World Youth final by Alizide in Baku,Azerbaijan.

The Belfast orthodox, now boxing at bantam in the paid ranks, confirmed that he donated his Irish light-fly vest to the Sports Museum in Singapore after his historic win.

The light-fly final in 2010 was the first ever Olympic Youth gold medal match in boxing.

Ward, meantime, is the only Irish boxer to represent his country at the Youth Olympics (Singapore 2010) and the Olympics (Rio 2016).