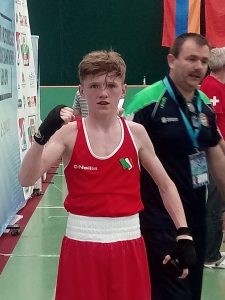 Cork’s Michael Faulkner and Dublin’s Martin Collins progressed to the last-eight of the European Schoolboy & Schoolgirl Championships in Bulgaria this afternoon.

Faulkner exhibited his class to see off Georgia’s Gocha Gordulava, the Leesider showcasing good combinations and footwork to take all three rounds.

Drimnagh pocket rocket Collins was involved in a see-saw three-rounder with rangy Belarusian Anton Salika, the Dubliner taking a majority of judges with him to seal a well-deserved victory.

An open and clean contest saw Ukraine’s Tymofii Krupko edge a 4-1 split over Behan who found the target with crisp shots in all three rounds.

Donovan, the last Irish athlete in action today, appeared to have done enough versus Hungary’s but the split went against the Clonmel BC and Ireland pin-weight.

Overall, Team Ireland won seven of eleven  bouts today on another hectic afternoon and early evening for the Irish coaches, staff and vociferous fans by the banks of the Black Sea. 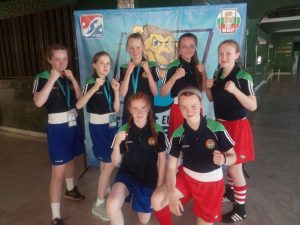 The last 16 phase of the tournament is now complete.

Eight – all male – Irish athletes are in action tomorrow looking to claim at least bronze while the remaining Irish female panel will be aiming to upgrade their guaranteed bronze to at least silver in Saturday’s semi-finals.