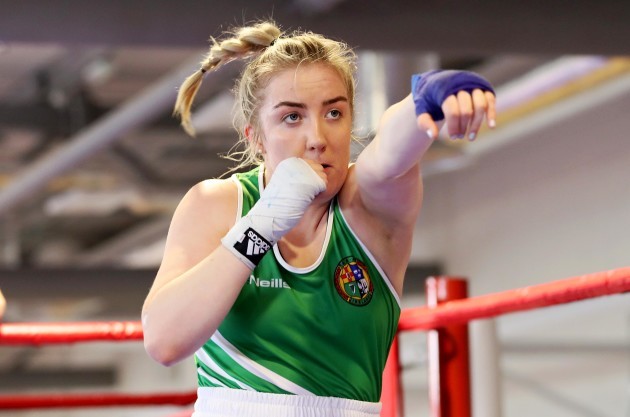 Christina Desmond improved Ireland to 2 and 0 at the World Elite Women’s Championships in Ulan-Ude, Siberia today.

The Cork welter beat England’s Commonwealth champion Sandy Ryan on a 4-1 split decision to book her ticket into the last 16.

The Rebel southpaw, whose backhand repeatedly stung the Derby orthodox, won the first round on the unofficial cards, and Ryan, benefiting from a surprise public warning for slapping, claimed the second.

However, Desmond, a former European bronze medallist, put the foot on the gas in the final 30 seconds of a close bout to seal victory and join Ceire Smith in the last 16.

She’ll now meet Canada’s Myrian Da Silva next Wednesday. The Quebec-native and Pan American finalist is the No. 5 seed in the welter class in Ulan-Ude.

Meanwhile, Belfast feather Michaela Walsh, the No. 5 seed in Ulan-Ude, meets Carmara Fatoumata of Mali for a place in the last 16 tomorrow.