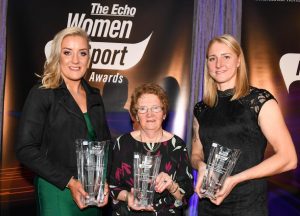 Christina Desmond admitted she was overwhelmed after winning the 13th Echo Sportswoman of the Year Award yesterday.

The Irish Youth Olympian won two national Elite belts in 2019 and was only beaten in the 2019 World and European Elites in Siberia and Spain by the eventual champions, Turkey’s Busenaz Surmeneli and Russia’s Darima Sandakova.

“I’m overwhelmed, it is a great honour,” the Cill na Martra welterweight told the Echo after claiming the award for a second time.

“There are loads of talented athletes inside there and they are top class, excelling at their own event and in their own sports.”

Michael O’Brien, President of the Cork Board, hailed Desmond’s performances in domestic and international competition in 2019 and congratulated the Irish titlist on her award.