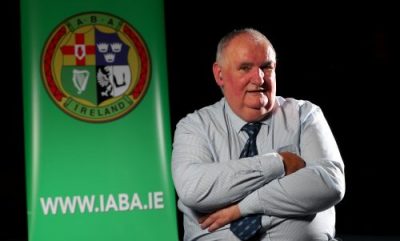 O’Rourke succeeds Pat Ryan who has served as President since 2015 securing 194 votes as against the 102 votes obtained by Ryan.

O’Rourke has been involved in boxing for more than 50 years. A Kildare native, O’Rourke hails from St. Michael’s Boxing Club in Athy where he has overseen 185 national titles during his time as Head Coach.

O’Rourke previously held the position of President of the IABA from 2000 until 2010 during one of the most successful periods in Irish boxing, which included three medals at the Beijing Olympics in 2008. O’Rourke was also instrumental in the incorporation of the IABA in 2008. Following his tenure as President, O’Rourke went on to serve as Technical Director for the IABA from 2010 to 2014.

In the other election results announced at the Convention, Joe Hennigan was elected Vice-President with 129 votes to the 86 for Bernie Harold and 76 for Anna Moore. Art O’Brien was returned as Secretary obtaining 107 votes to the 95 secured by Antoinette Faye and 81 for Liam Brereton. Larry Morisson was elected unopposed to the position of Treasurer as was Stephen Connolly to the office of Registrar.

Paddy Osborne, Larry Durand, Philip Rooney, Seamus Dowling, Gerry Storey, Eugene O’Kane, Johnny Carey and Frank Ward were all elected to the IABA Boxing Council. The elections were overseen by BKRM who are the auditors to the IABA.

Dominic O’Rourke, President, IABA, said; “I am honoured to have been elected President of the IABA at this year’s Convention. The sport has undergone a difficult time of late. However, boxing remains Ireland’s most successful Olympic sport and with over 300 clubs nationwide some of which are in the most disadvantaged community the IABA makes a significant contribution to Irish Sport at both community and high performance levels.

“We are also lucky to have a group of very talented athletes and coaches and the many committed volunteers without whom the sport simply would not happen. I look forward to working with them as well as our CEO, Fergal Carruth and the Board of Directors to unite and strengthen the sport of boxing which is of huge importance to Ireland.”

Joe Christle, Chairman of the Board of Directors of the IABA, said: “I want to congratulate Dominic on his election who has given so much to the sport of boxing for more than 50 years both as a coach and as an administrator. Dominic has not only coached many of Ireland’s top boxers both at national and international level but was also instrumental in advancing the administration of the sport including, instigating the incorporation of the Association in 2008. I am confident that boxing will make significant progress under his stewardship over the next two years and very much look forward to working with him.”

Nomination for the Oifigeach Geailge

Elected Members of Officer Board