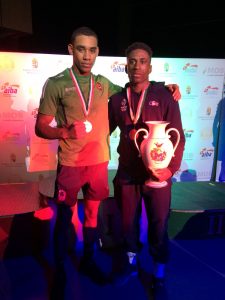 Gabriel Dossen had to settle for silver in tonight’s Bocskai Memorial 75kg final in Debrecen, Hungary.

The Galway middleweight was beaten on a unanimous decision by France’s Victor Yoka.

Yoka won the first and third rounds, with Dossen, who is returning to competitive action following a knee injury, claiming the second. 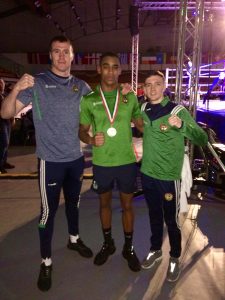 The Olympic BC southpaw impressed in the second frame against the Parisian, a well-timed combination the pick of his punches, and the fight, in the middle stanza.

The first and third rounds were close but the judges leaned – 29-28 across the board – toward the relentless aggression of the Frenchman.

Dossen won three fights, one by way of a walkover, en route to tonight’s decider.

The 2019 Irish Elite champion decisioned Mindougas Gedminas (Norway) and Robert Cservenka of Hungary in the last 16 and quarter-finals. 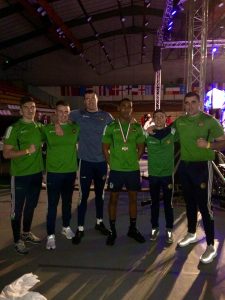 The Irish squad, which includes Brendan Irvine and Dean Gardiner, and staff are due to arrive home at 6.05pm tomorrow evening via Dublin Airport.

(Images: Dossen and Yoka and Irish squad and staff)