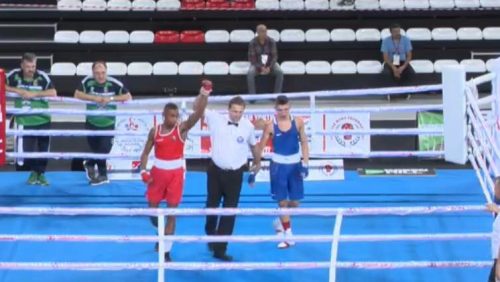 Gabriel Dossen has his hand raised in victory today

Gabriel Dossen and Paddy Donovan advanced to the last 16 of the European Youths in Antalya, Turkey today.

But Craig Kavanagh and Eamer Coughlan bowed out at the last 32 stage to Israel and the Czech Republic.

Donovan progressed after recording an inside the distance win.

The Limerick light-welter, a World Junior finalist, forced Poland’s Konrad Dialas into standing counts in rounds one and two en route to a second frame TKO.

Dialas took a count off a cluster of punches in the first and, after following instructions from his corner, Donovan fired in a big body shot in the second the ref intervened again and waved it off.

Dossen, boxing well within himself in all three rounds, saw off Estonia’s Pavel Kamanin in the welterweight class.

The Galway southpaw, looking composed throughout today, mostly dictated terms with his jab. Occasionally picking up the pace, as he did to good effect near the end of the second, the World Youth bronze medallist took all three rounds.

Kavanagh was edged on points by Israel’s David Kharmats in the bantam class and Coughlan’s fight with Artur Szachbazian of the Czech Republic, who was born in Poland, was stopped in the second after Coughlan took a standing count.