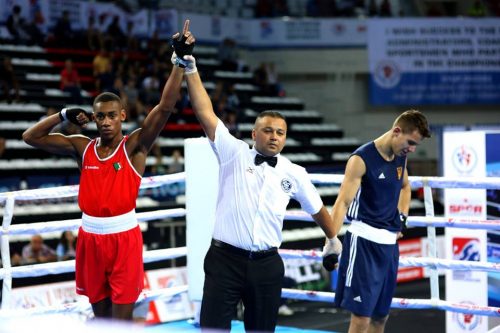 Gabriel Dossen has his hand raised in victory in Antalya

Gabriel Dossen cruised to his third victory since Saturday at the European Youth Championships to guarantee Ireland at least bronze in Antalya,Turkey.

The Galway southpaw beat Azerbaijan’s Nijat Hasanov this afternoon to advance to the welterweight semi-finals.

Footwork, shot selection, counter-punching, the World Youth bronze medallist showcased the lot on a frustrating afternoon for his Azeri opponent who never really got near the Olympic BC stylist.

Earlier today, David Oliver Joyce was adjudged to have lost his quarter-final with England’s Ivan Price in Antalya, Turkey.

The Dubliner consistently took the fight to Price in a fiery all southpaw battle.

Joyce, walking down his rangy opponent for most of the three rounds, with both young men soaking up plenty of shots, had a particularly good third round but the decision, which was initially announced as an Irish win……. went against him.

The Ballymun BC stand out raised his hand in victory after the second verdict was confirmed. Brilliant performance from the 16-year-old Irish champion versus the 2016 European Junior champion.

Paddy Donovan and Jordan Myers are in quarter-final action tomorrow.