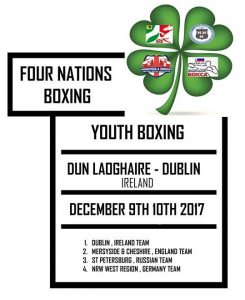 The Dublin County Boxing Board will be hosting a Four Nations Youth Boxing Tournament this weekend Saturday 9th and Sunday 10th December.

The visiting teams will be from St. Petersburg Russia, NRW (North Rhine-Westphalia) Region Germany and the Leinster Development Squad.

JP Kinsella, who is one of the organisers of the event, believes it will be a world-class tournament.

He said: “The Dublin Coaching Committee have targeted development for Dublin U18s boxers, in this team of 10 boxers we have really promising young lads. We needed to get them some international experience, and really hope these two tough bouts will put the boys in good preparation for the upcoming All Ireland U18s in January.

“It doesn’t get much harder than boxing powerhouses such as Russia & Germany, we are delighted to have them come to us. We hope this will secure the future for Dublin U18s boxing for next 4 years, the Russians & Germans would like to host the same Tournament next year & future years – which is brilliant”.

“We would like to take this opportunity to thank our friends in Leinster Boxing in particular Mick Darby who stepped in last week with a full team, as our 4th team had pulled out due to regional tournaments overrun.”

10am NRW Germany vs Leinster Development
2pm Dublin vs St. Petersburg Russia
Admission per day: Adults €5, free for kids under 12.