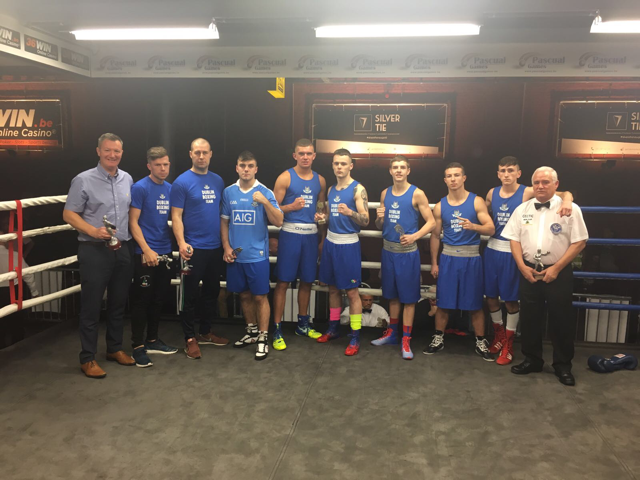 The Dublin squad, pictured, emerged victorious from there recent Brussels trip versus the Belgium national team.

Dylan Doyle was first into the ring for the dubs and after a very close contest with both boxers having there moments in a very technical and tactical bout it was the Belgian champion who was adjudged to have won the the bout on a 2/1 split against Dublin’s Irish flyweight champion but Doyle can be very happy with performance.

Next up was hot Dublin prospect Pierce O’Leary who had to box his way into range to land some big body combinations against the fast moving Belgian and it was the big hitting dub who had his hand raised in victory on a 3/0 points win.

Third into the ring was the slick Glasnevin pugilist Jordan Moore who outboxed his Belgian opponent for three rounds with the Belgian struggling to keep pace with the Irish champion Moore who made it win number two for Dublin.

Crumlin’s Peter Carr stepped between the ropes next for Dublin, after a bout that went one way then the other it was the Belgian boxer who emerged with the win but Carr can be very proud of his performance.

Next to trade leather was Dublin’s Conor Wallace and with the contest in the balance after two rounds it was Wallace who stepped up a gear in the final stanza and force the game Belgian into a standing count with a beautiful right hook near the end of the round, it was Wallace who had his hand raised on a 2/1 split.

Last up for the capital team was Chris O’Reilly, but it was his tricky 6ft 2” opponent who started fast to win the first round but o’reilly who changed tactics in the 2nd to bob and weave his way to sink some telling shots to the body and push the tall Belgian onto the back foot and o’reilly made sure of the victory with a high volume big 3rd to win on points and round off victory for the Dubs.

The Dublin coaching and management team was very happy with the win with team manager Mel Leonard stating.

“We were delighted with all the performances on the night and with the weekends trip overall,we would also like to wish the boxers the very best of luck for the season.”