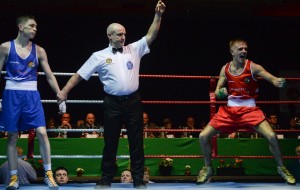 Ireland’s seven-strong squad leave for Spain tomorrow morning ahead of the start of the European Union Elite Men’s Championships.

Boxing begins at the 25-nation tournament in Valladolid on Friday.

Ireland, Italy and Bulgaria, in that order, are in the top three position in the all time EU medals table. Table toppers Ireland has won 12 gold, 12 silver and 8 bronze at this level since the inaugural tournament in Strasbourg in 2003.

On the last occasion that the EU Championships were held in Spain, Andy Lee, Ireland’s only boxer at Athens 2004, claimed silver in Madrid after losing out to Romania’s Olympic silver and bronze medallist Marain Simion in the middleweight final.

The squad have put in the hard hours in an intense training camp at the University of Jordanstown in Belfast with the Ulster HP team, Bulgaria, France, Germany, Italy, Romania and Switzerland ahead of the start of the 9th edition of the tournament.

Irish coach John Conlan reported that 74 boxers, including Olympic. World and European champions and medallists, took part in the camp.

European Elite medallist Kurt Walker lines out at bantamweight in Valladolid and is targeting a podium finish in the lead up to the qualifiers from Tokyo 2020 next year.

“I should be a good shout to win gold here but I’m just going to take everything in my stride and see what happens, he told today’s Irish News.

“The training camp up in Jordanstown was very good, the perfect preparation really. All the people I sparred were top boys in the weight, and that’s what you need. We need to do more of them from now on, I think we are going to be doing more of them, because you really know where you’re at after those spars.”