Ireland will enter the 2018 edition of the European Union Men’s Championships in Valladolid, Spain as the No. 1 (male) nation in the tournament.

Ireland, Italy and Bulgaria, in that order, command the top three positions in the all-time medals table since the inaugural competition in France in 2003.

Former WBO World middleweight titlist Andy Lee made the middleweight decider in Madrid in 2004, the year he qualified for the Athens Olympics, and Egan returned to claim our first EU gold in Italy 12 months later.

Those of us with long enough memories will also recall that two people with the Irish squad, whose names we will not mention, gave a fine rendition, including the high notes and operatic arrangements, of Queen’s Bohemian Rhapsody in the Ringside Club adjacent to the Stadium in celebration on the night of the finals at the home of Irish boxing!

David Oliver Joyce, a three-time EU champion, completed his hat-trick at the last EU Men’s Championships in 2014 in Bulgaria. 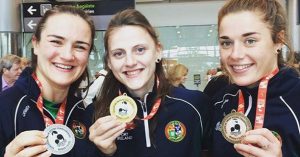 Alanna Murphy, who met Taylor in the first officially sanctioned women’s bout in Ireland at the National Stadium in 2001, claimed Ireland’s first women’s EU medal (bronze) in 2006 in Italy.

The 2018 European Union Men’s Championships begin in Valladolid, a city with strong Celtic origins, on November 8.