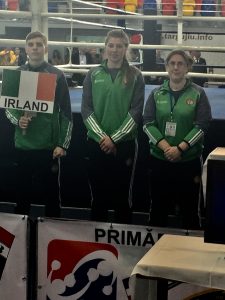 Ireland will be aiming to finish amongst the medals at the European U/22 Men’s and Women’s Championships in Turgu Jiu, Romania tomorrow.

Shannon Sweeney and Amy Broadhurst are one victory each away from at least bronze in the light-fly and light quarter-finals.

Sweeney is in against Bulgaria’s Mari-Emi Todorova at approximately 1 pm (Irish time) and Broadhurst meets Turkey’s Esra Yaldiz about an hour later.

Meantime, earlier today in Romania, Gabriel Dossen advanced but Jordan Moore bowed out. Impressive performances from the Irish pair with both men winning two rounds each on the official and unofficial scorecards.