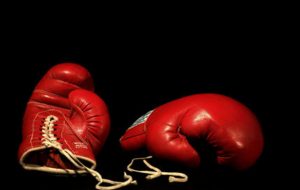 Azerbaijan, France, Great Britain and Spain did the double at the Copperbox Arena in London.

The 43-nation tournament was postponed on March 16 after three days of competition because of the Covid-19 pandemic.

Gabriel Escobar and Jose Brotons-Quiles did the business for Spain. Escobar was – and still is –  drawn to meet Irish captain Brendan Irvine, who also qualified in London, for at least bronze in the last eight before the tournament was abandoned.

While medals – given that the primary aim of Olympic qualification had been achieved –  could be considered a secondary objective, ranking points for Tokyo are also up for grabs at the qualifiers.

Madrid southpaw Escobar is the current European champion. However, he dropped a unanimous decision to Irvine in the quarter-finals of the 2017 European Elites in Ukraine.

A former World Series of Boxing fighter, the Spanish flyweight also lost to three-time Irish Olympian Paddy Barnes in the semi-finals of the Algirdas Socikas multi-nations in Lithuania in 2016.

Meanwhile, eight flyweights and eight feathers qualified in London, but 61 places will still be on the line when the European qualifiers resume at a date to be confirmed.