Team Ireland finish up their final training session for the 2019 European Games at the University of Jordanstown in Belfast tomorrow ahead of the second edition of the Continental Olympics in Minsk, Belarus later this month.

Current World Elite champion and World No.1 Kellie Harrington lines out at lightweight in the Belarussian capital.

The boxing squad departs for Minsk next Tuesday. Approximately 4,000 athletes from 50 nations are slated to battle it out in 15 sports (23 disciplines).

Irvine, who is included on the 2019 panel, took home silver from the inaugural Games. 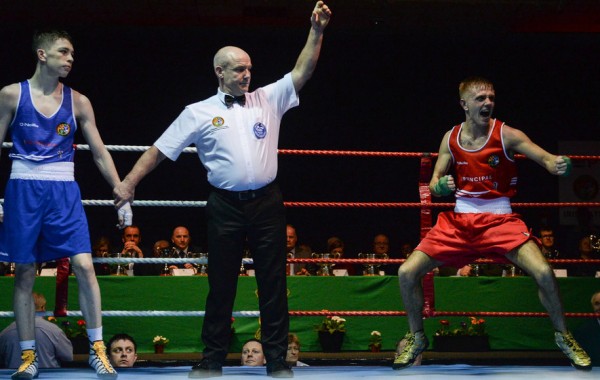 Kurt Walker was edged on a 2-1 split decision by Russia’s eventual gold medallist Bakhtovar Nazirov at the 2015 Games in Baku, while Michaela Walsh lost to Nazirov’s compatriot Elena Savelena, who also won gold, in the last eight four years ago.

Walker and Walsh, both current European Union Elite bantamweight champions, are also included in the Irish team for Minsk where Walker wants to improve on his previous outing in the Azeri capital four years ago.

“I’m hoping to put in some big performances out there training has been going well so far and we have an international sparring camp (Jordanstown) so everything is falling into place, he said.

“I went four years ago and didn’t get a medal so I’d like to turn that around and take gold home this time.”

Bernard Dunne, IABA High-Performance Director, believes that the European Games are ideal with the qualifiers for Tokyo 2020 – which are expected to begin early next year (to be officially confirmed by the IOC at the end of the month) – looming on the immediate horizon.

“The squad are preparing really well for Minsk and are very much looking forward to what will be a high-quality tournament, he said.

“It’s all about performances and building toward the qualifiers for Tokyo.”

Head coach Zaur Antia, John Conlan and Dmitry Dimitruk will be working’s Ireland’s corner at the Sports Palace in Minsk.

Regan Buckley, Anthony Browne and Dean Gardner are likely to be the first between the ropes as the light fly, heavy and super-heavy classes are slated for Day 1.

“Minsk will provide an exciting opportunity for Team Ireland to come together in a multi-sport environment to compete against some of the best talents in Europe, providing a measure to gauge where they stand,” said Tricia Heberle, Ireland Chef de Mission.

“As an athlete, you don’t get many chances to compete for your country in multi-sport events so it will be a good learning experience for many of the team as we prepare for Tokyo 2020.”