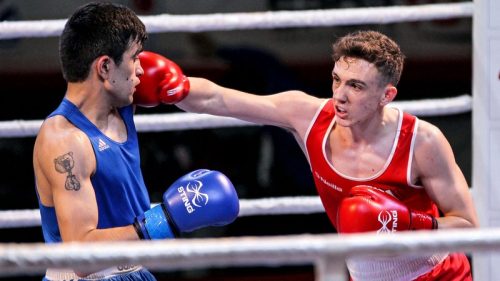 Ten Irish boxers – including Brendan Irvine who qualified for Tokyo 2020 – will still be in play when the European qualifiers for Tokyo 2020 resume at the date and host city to be confirmed.

The 43-nation competition was postponed in London last Monday night because of the Coronavirus outbreak.

Kellie Harrington, Michaela Walsh, Aoife O’Rourke, George Bates, Aidan Walsh, Michael Nevin, Emmet Brennan, Kiril Afanasev and Dean Gardiner were scheduled to fight on the March 17 and March 18 but the tournament was shelved on March 16 after three days of competition.

Bates, who requires a top 8 finish, was one win away from booking a spot at the 32nd Olympiad.

Boxers requiring top 6 finishes must reach the semi-finals to automatically qualify. However, if they make the quarter-finals and lose they’ll box-off for the remaining places with the other beaten quarter-finalists.

There’s no ambiguity about the men’s heavy and super-heavy and women’s middle limits; they must finish in the top four (reach the semi-finals).

Belfast flyweight Brendan Irvine, meanwhile, qualified by virtue of finishing in the top eight after beating Hungary’s Istavan Szaka to join an illustrious cast of Irish boxers – beginning with Myles McDonagh (Army BC) and Cork’s Willie “Boy” Murphy (Army BC/Garda BC) at the Paris 1924 and Amsterdam 1928 Games – to become a two-time Olympian.

The “Boy” Murphy was born in India to Cork parents and also claimed an Egyptian middleweight belt when he was just 17.

Meanwhile, Irvine, the Irish captain in London, having achieved the prime objective of qualifying for Tokyo, and Spain’s Gabriel Escobar will meet in the European quarter-finals with at least bronze up for grabs.

16 flyweights and featherweights qualified for the 2020 Games last Monday night.

61 Olympic places remain to be claimed in Europe.

Overall, Ireland won six out of nine bouts in London, a 66% return.