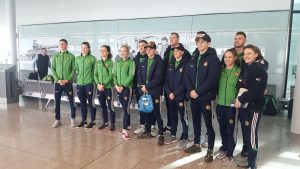 Nine Irish boxers will be in the hunt for Olympic places when the European qualifiers for Tokyo 2021 resume at a date to be confirmed.

The tournament was postponed because of the Covid-19 pandemic on March 16 after three days of competition at the Copperbox Arena in London.

Sixteen flyweights and featherweights, including Irish captain Brendan Irvine, booked tickets for Tokyo before the curtain came down on the 43-nation tournament with 61 Olympic places unclaimed.

George Bates was scheduled to meet Azerbaijan’s Javid Chalabiyev in the last 16 on St Patrick’s Day with a Tokyo berth on the line as the light-welters require a top 8 finish.

Baku-native Chalabiyev claimed gold at the 2013 World Elites in Kazakhstan, where Jason Quigley became the first Irishman to reach a World Elite final, after beating an old friend of Irish boxing, Russia’s Vladimir Nikitin, in the bantamweight final.

More recently, the Azeri stand out won medals at the Islamic Solidarity Games and the Great Silk Way tournament.

Harrington was slated to face Poland’s Aneta Rygielska, an opponent she has twice beaten in the past, on St Patrick’s Day.

Athletes requiring a top-six finish get two shots at Olympic qualification as if the reach the quarter-finals and win they’re through.

However, if they lose in the quarter-finals they will go into a box-off with the other beaten quarter-finalists for the two remaining places.

Nevin and Armenia’s Arman Darchinyan were scheduled to trade leather on March 17. 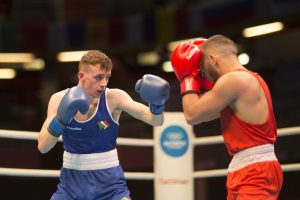 The Yerevan-born middleweight Darchinyan has 141 bouts under his belt in his career. He lost
to Max der van Pas of the Netherland’s, who Nevin beat in London, in the 2017 Europeans.

There was no ambiguity about what Aoife O’Rourke, Kiril Afanasev and Dean Gardner required in London; a top-four finish (reach the semi-finals).

Meanwhile, while two-time Irish Olympian Irvine achieved his primary objective in London, he still has to meet Spain’s No. 3 seed, Gabriel Escobar, in the quarter-finals with at least bronze on the line.

The International Olympic Committee Task Force for Boxing is expected to confirm the new dates for the European qualifiers this month.

When the Europeans are completed, 173 places will have been booked for Tokyo 2021 with the Americas qualifiers and the final World qualifiers remaining.

(Tournament was postponed on March 16 because of the coronavirus outbreak)