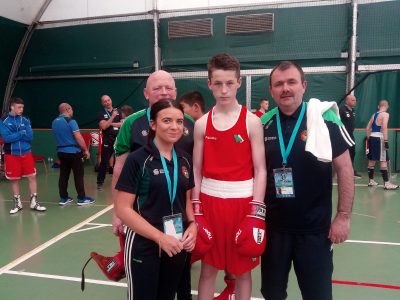 Four Irish boxers advanced to the quarter-finals of the European Schoolboy/Girl Championships in Albena, Bulgaria on a day of contrasting fortunes for Team Ireland. 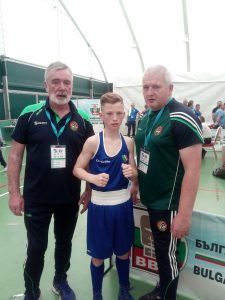 Brennan advanced after a fiery encounter with Ukraine’s Denys Rosdolskyi. Both young men took standing counts in the second with the Irish skipper sealing the win after rocking his opponent with a big right and combination in the third. 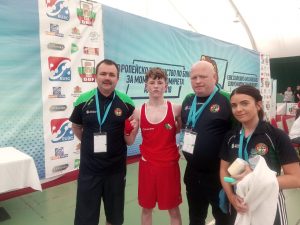 Faulkner dominated versus Greek orthodox Georgis Georgantzas, the Limerick southpaw finding the target with a wide selection of shots in all three rounds against a brave but ultimately outclassed opponent. 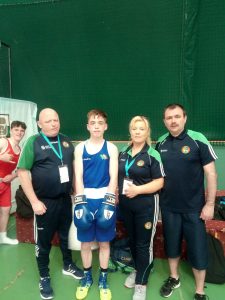 Fay subjected Dovydas Paskevicius of Lithuania to three rounds or unrelenting pressure – his best work was probably in the first when he had his opponent in trouble on the ropes – to book his ticket to within striking distance of at least bronze. 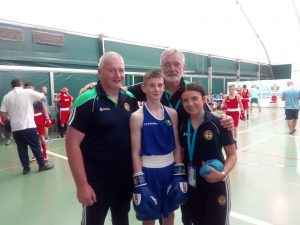 Likewise with Nevin, who looked as if he was going to stop Serghei Nova in the third. In fairness to the diminutive Moldovan, he did battle away in all three frames but never really had an answer to Nevin’s swift combinations off the front and back foot.

Brannon McMahon, James McGuinness, Martin McDonagh and Thomas McAleer, who out-boxed Savelii Suprunets of the Ukraine, bowed out at the last 16 stage in the afternoon and evening sessions.

Big performances from all young men who wore their Irish vests with pride against talented opponents on a day when the Irish coaching staff of Liam Brereton, Jim O’Neill, Eva Carr, John Gallagher and  Tom Hayes put in a massive shift.

It will be even more hectic tomorrow, with 11 Irish boxers between the ropes in another big day for Ireland at the Black Sea Holiday resort.

Special mention to the Ireland squad, staff and fans who got behind the boys in green and created a tremendous atmosphere for all eight bouts involving Ireland today.