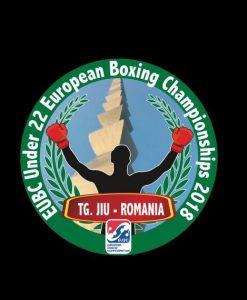 Niamh Earley and Shauna Blaney bowed out of the European U/22 Championships in Targu Jui, Romania at the last 16 stage this afternoon.

Earley lost to Aikaterini Koutsogeorgo of Greece, the current Strandja multi-nations finalist, after three close rounds in the flyweight class.

Blaney and Nedkova Ivanova was equally as tight with neither feather dominating a see-saw contest before the Bulgarian got the nod from a majority of the judges.

Conor Quinn is in action tomorrow versus Russia’s Maksim Stakheev for a place in the last-eight.

Irish captain Jordan Moore (date now yet confirmed, according to draw sheets) is in against Romania’s Eusebi Jitaru who beat England’s Peter McGrail in the 2017 European U/22 final on a 3-2 split decision in Romania.

Please scroll down for draws and results. Click here for tournament page.

Date to be confirmed

Q/Final (Dates to be confirmed)