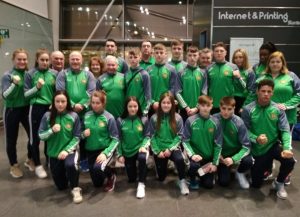 Team Ireland have six boxers between the ropes in the last-four of the European Youth Championships in Italy tomorrow.

Four of the six– Lauren Kelly, the captain of the women’s squad, Daina Moorehouse, Dearbhla Rooney and Evelyn Igharo – are in action in the afternoon session which begins at 1pm (Irish time).

Jude Gallagher and Dean Clancy box in the second bouts in Ring A and B in the evening session which begins at 5pm (Irish time).

Irish head coach Billy McClean, speaking after this morning’s training session, said that the squad are fit and ready and looking forward to their last-four bouts after coming through tough semi-finals on Sunday.

The semi-finalists, who are all guaranteed at least bronze, have also qualified for the Men’s and Women’s World Youth Championships at a host city to be confirmed in August.

Athletes who reach the quarter-finals could also qualify for the World Youths, contingent on the final placings of their quarter-final opponents.

Click here for qualification guidelines in relation to the World Youths and the Olympic Youths in Buenos Aires, Argentina in October.